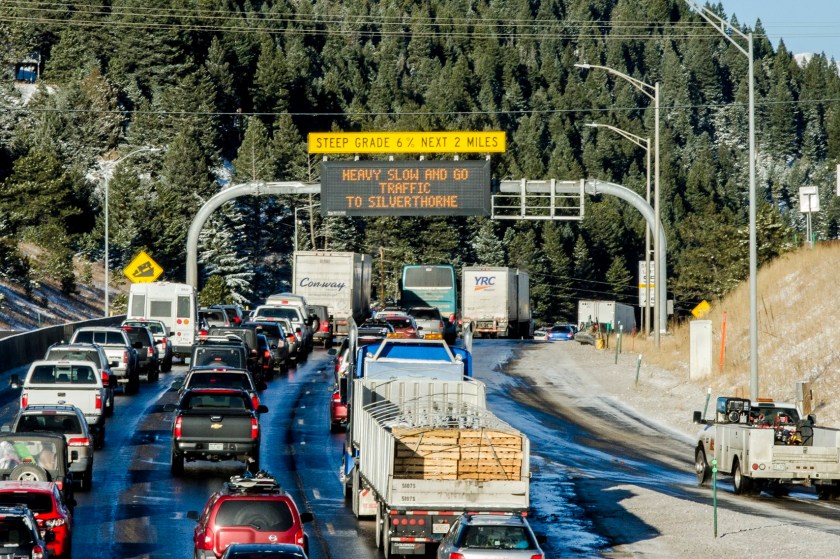 Like thousands of other young people in the last several decades, I moved to Colorado to ski. I’d heard horror stories about people getting stuck on I-70 (the major artery connecting Denver metro to the mountains) for hours on weekends, but I thought maybe my friends were exaggerating. They weren’t.

Approximately 60 miles from Denver, the Eisenhower Tunnel connects the eastern slope of the Rocky Mountains to the western slope. It’s also where traffic regularly gets backed up for hours on Friday evenings, Saturday mornings and Sunday afternoons, creating congestion along the rest of the I-70 corridor. Colorado’s population has grown 128% since the tunnel opened in 1973, creating a hellish traffic scenario transportation planners likely couldn’t have imagined when lift tickets to local resorts were selling for around five dollars.

Today, Colorado skiers try all kinds of solutions to beat the traffic: leaving the city before dawn, negotiating flexible work schedules with their bosses, and splurging on hotels to stay the weekend, among others. But these are bandaid solutions, failing to address the root of the issue, and none of them are even guaranteed to save drivers travel time. What we need is a better way to the mountains.

Denver’s public transportation entity, known as RTD (Regional Transportation District), has beefed up their bus service to the mountains in recent years. Several ski resorts subsidize fares to help keep them low, but right now most of the buses are at less than half capacity when they leave the city. Those buses are little help to those who live outside Denver, and without a dedicated bus lane on I-70, they get stuck in the same traffic as everyone else. The only way to truly address Colorado’s ski traffic is a train.

Modern passenger rail in the United States is limited at best, partly because commercial rail companies here are powerful. They own the rights to most of the tracks in the country and are difficult to negotiate with when other companies or government entities try to enter the game. But in a state like Colorado, with a booming population and ski industry, reviving passenger rail is a necessary solution.

More than 60 percent of Americans would use high-speed rail if it was available to them, according to a 2015 survey by the American Public Transportation Association. RTD’s train from Union Station to the Denver International Airport carries about 20,000 people each day, which proves Coloradans want rail service to heavily visited areas. A single train can carry 10 times as many passengers as a bus and has the potential to take hundreds of cars off the road to our beloved ski resorts.

from Union Station to Winter Park ski resort opened in 1940 and ran until 2009. Amtrak brought back the service in 2017 and it’s been wildly popular ever since. More than 19,000 people rode the train (which operated only two days a week) to Winter Park and back in 2018, a 7 percent increase over the previous year. Tickets for the train, which now runs every Friday, Saturday and Sunday during ski season, regularly sell out.

To make rail truly competitive, it needs to be faster than the automobile. Most of the train tracks in the United States were built in the 1800s and can’t support truly high speeds. To resolve that issue, and to avoid having to share tracks and negotiate with powerful rail companies, we’ll need to build new tracks. The Colorado Department of Transportation conducted a study in 2014 to figure out what kind of rail technology would work best for a ski train and landed on magnetic levitation (maglev, such as those used in Shanghai), due to the steepness of the mountain corridor.

Cost of construction? Between $13 billion and $16 billion. But if Coloradans are serious about ending I-70 traffic and making their ski commute considerably less stressful, we have to find the will to make it happen.

Politically, high-speed rail isn’t an easy sell. RTD is strapped for cash as it is, and increasing the quality and availability of passenger rail in the U.S. would undoubtedly impact the airline and automobile industries. However, we can’t allow industry leaders to squash this solution the same way they did a century ago.

Democrats tend to be more reliable supporters of mass transit than Republicans for various reasons, from environmental impact to social equity. But in Colorado, rail should be a non-partisan issue. Traffic impacts everyone regardless of their political leanings. The federal government spends billions of dollars each year maintaining the highway network. If a fraction of that budget was allocated to rail construction, the country could be on a path to faster, greener and more enjoyable transportation.

Ideally, the next president of the United States would see the value in passenger rail and be more supportive of reviving the service than those in the past. With a new leader in the executive branch, Colorado’s ski train could potentially get some federal funding.

Alternatively, some rail companies in the U.S. are avoiding public dollars all together. Texas Central is building a bullet train from Houston to Dallas without relying on any taxpayer funds. Based on the success of the Winter Park Express,

private companies and investors should see the construction of a new ski train as an opportunity. The private sector might also be more incentivized than the government to get rail projects moving along quickly.

Public-private partnerships have proven to be a useful mechanism for funding large-scale infrastructure projects, often helping to speed up the process. By combining federal, state and private funds, Colorado’s ski train could become a reality.